Ratatosk are of the same high craftsmanship class as Valkyria Vanadis, ie Elixirs, or "Fine" which is a traditional liqueur designation used by the French liqueur makers since the 1900s to describe a liqueur that has been particularly high quality. Our base for the recipe to Ratatosk Apple & Cinnamon Liqueur stems from the rules and procedures used by the French liqueur makers to produce the high quality, and exclusive liqueurs that Ratatosk is.

Ratatosk Apple & Cinnamon Liqueur is based in organically produced agricultural alcohol, organically grown apples from Vikbolandet outside Norrköping and water from Dalarna. This accompanied by pure organic sugar of the best quality makes this a fantastic handcrafted liqueur with a generous alc.  30% by vol. and over 437 grams sugar / liter.

The taste may be described as an apple pie in liquid form! The cinnamon, the must from the organically grown apples and sugar makes the drink to an amazing taste experience!

Valkyria Ratatosk is ideal as avec with coffee and cakes. Serve as a shot whit whipped vanilla cream on top or as a ingredient in fantastic cocktails. 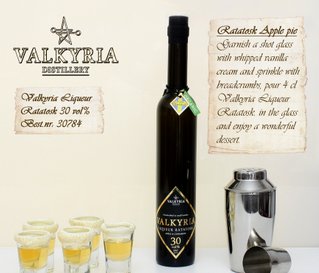 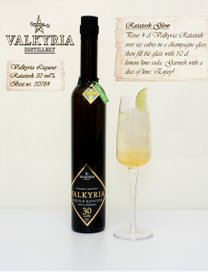